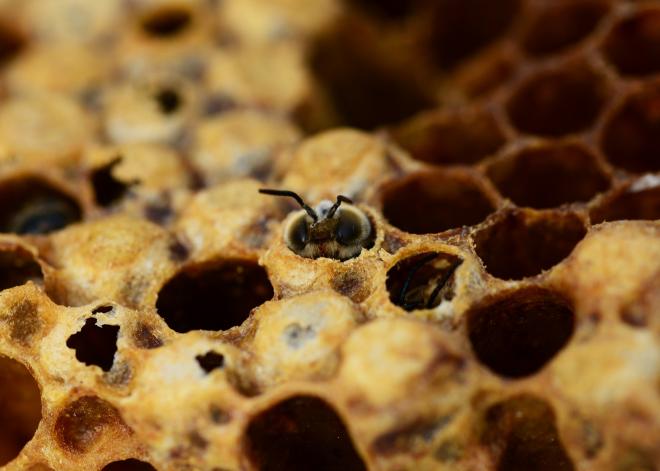 Bees are social insects living in colonies that are known for their large size. A bee colony can have several thousands of bees. The bee colony's success depends on the diversity of the population, which is why bees are divided into several castes.

Each caste has a different set of tasks to perform to help the colony survive. There are three specific castes in the beehive: a queen bee, drones, and worker bees. While queen bees are powerful within their society, they cannot establish new colonies without worker bees and drones.

Worker bees provide food and wax to construct the hive, while drones provide fertilization. We hear a lot about queen bees and worker bees, but drones are often overlooked even though they have quite an essential role in the colony.

In this article, we will learn a bit more about drone bees and their role in a honeybee colony. For starters, how are drones born?

How are drones born?

Drone cells are larger than other cells, so a queen bee knows to lay unfertilized eggs in them. However, drone eggs are unique in one regard. Since they don’t need to be fertilized, drone eggs can also be laid by a worker bee.

An interesting fact about drones is that they have a grandfather, but don’t have a father. Since drone eggs are not fertilized, they only receive genetic components from the queen. The queen bee comes from a fertilized egg, so she has a father - the drone’s grandfather.

A laid egg becomes a larva that is fed royal jelly by worker bees. Royal jelly serves as a source of protein needed for further development. Unlike queen bee larva, the worker bee and drone larvae are fed royal jelly only for the first 2-3 days.

After that period, they are fed a mixture of pollen and honey called bee bread. From the larval stage, a drone goes through a pupa stage, and these stages are complete in 24 days. Lastly, a young drone hatches.

If you are a beekeeper, you should pay attention to drone brood. Drone cells are usually located at the bottom of the frame. Compared to worker bee cells, they are larger in diameter, and the cap is more rounded and higher.

Since drones take longer to hatch, drone cells can be an easy food source for mites and a place to reproduce.

What is the difference between a worker bee and a drone bee?

From a biological aspect, the main difference between the two is that drones are male bees, while worker bees are female bees. Moreover, drones don’t have a stinger, so they cannot defend themselves or the hive.

Their only form of defense is a scare tactic where they may swing their tail in an attempt to frighten the disturber or buzz around intruders to disorient them.

Due to their size being bigger than the size of a worker bee, drones are often mistaken for the queen. However, the difference can be noticed in the shape of their abdomen. The drone abdomen is shaped like a barrel while the queen’s shape is thinner and tapered.

Moreover, the drone’s eyes are huge and cover almost his entire head.

Unlike worker bees, drone bees don’t forage for water and food and don’t have pollen baskets. Since drones don’t have wax producing glands, they also don’t help with the building of comb.

Worker bees are also shorter and more slender than drones, with pollen baskets on their back legs. They have a stinger just like a queen bee but can sting mammals only once. This is due to the anatomy of the stinger.

A queen bee has a smooth stinger, so she can sting multiple times, while worker bees have a barbed stinger that gets stuck in whatever they sting.

But their differences aren’t only on the biological level; their roles in the beehive are also quite different.

What does a drone bee do?

Drone bees do not show typical workers bee behaviors such as hive construction, nursing, or resource gathering. The main function of drone bees is to fertilize a receptive queen bee. Drones usually don’t mate with a virgin queen of the same colony because the queen flies further to a drone congregation area than drones do.

If mating happens between a drone and a queen bee of the same hive, the resultant queen will have many empty cells on a brood frame, which is known as a spotty brood pattern. The high number of empty cells is due to the removal of diploid drone larvae.

Diploid larvae are fertilized eggs with two identical sex genes that develop into a drone instead of a worker. Since most of the work in the hive is reliant on worker bees, losing their numbers because of diploid drone larvae is quite an issue. Worker bees consume the removed brood to recycle the protein.

Mating between a drone and a queen bee occurs in flight, which is why drones have such big eyes. Because of in-air mating, their vision needs to be very good to locate the queens in the air. Drones wait high above the ground in the drone congregation area waiting for the queen to fly by.

If a queen is even slightly outside of this area, she might not even be detected by the drones. During mating, hundreds or even thousands of drones compete to mate with a queen. There is no fight; they simply try to fly the closes to the queen.

When a drone is successful in mating, several things happen. Firstly, all of his blood rushes to his endophallus, which results in him losing control over his body. Because of lost control, the drone’s body falls and leaves a portion of his endophallus attached to the queen.

It broadens the genetic pool, so bees have a greater ability to resist disease.

Even though drones have a highly specialized function, that is not their only benefit. They also help with regulating the temperature in the hive. When bees sense the deviation in hive’s temperature, they either generate heat by shivering or cool down the hive by moving air with their wings.

How long does a drone bee live?

When a drone mates and releases his sperm, it happens with such force that his endophallus gets ripped from his abdomen - essentially killing him shortly after. However, not all drones die from mating.

When foraging becomes more difficult in the fall because of the lack of resources, drones become just a burden to the colony. Resources have to be spent on sustaining them while they don’t contribute to the hive.

To ensure the survival of the colony, worker bees kick drones out of the hive. This process starts by starving the drones to weaken them and then escorting them to the entrance to be kicked out.

Being outside means that drones lose the food source and warmth, leading to them dying from hypothermia or starvation. Their average life expectancy is about 90 days.

The survival of the colony depends on each bee within it

As we mentioned before, we mostly only hear about worker bees and the hard work they do because they do most of it. But worker bees cannot survive independently; they also need drones and a queen bee to do their roles.

Drones are specialized for their main role - reproduction, but that brings benefits beyond just increasing the number of bees in the colony. We cannot forget the importance of genetic diversity. Without it, bee colonies wouldn’t be able to gain resistance to some diseases, and bad traits would be carried on from generation to generation - essentially weakening each new generation.

Nature always finds a way to balance things, which is evident in how bee reproduction works and the role of genetic diversity. The more we dig into how bees live, they are just more and more fascinating.

There are probably many things about bees that we haven’t discovered yet, and it is quite exciting to think about what other secrets they hide.