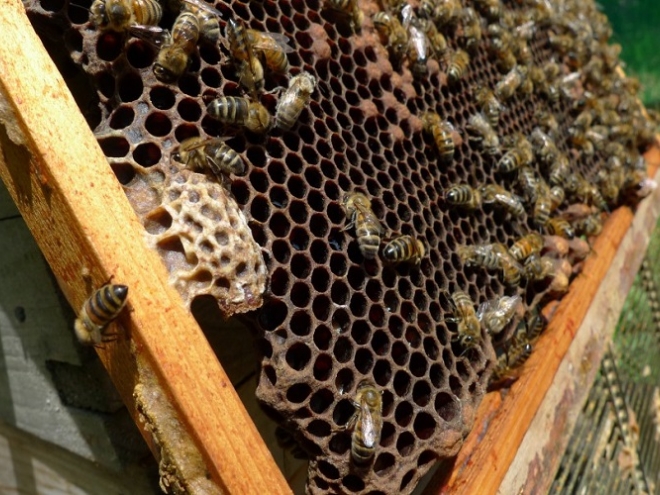 There are many factors that may contribute to weakening of a colony. In order to make colonies more or less equal in strength, equalizing is an effective method for great care.

Equalizing is commonly done in the spring during the buildup period, three to six weeks ahead of the blooming period (nectar flow), and it is done when there is a need in the weak colonies. Only the very strong colonies with a large amount of brood and large bees population are equalized. Weak colonies that are due to an old or failing queen are not worth equalizing. In cases like this it is better to be unite or requeen as described below.

There are many ways to strengthen weakened colonies. Here is how:

Surplus frames of sealed brood with adhering bees are taken from a strong colony and given to a weak colony. You should never take brood away from a weak colony. Frames removed from the donating colony are replaced with drawn combs. If drawn frames are unavailable then frames of foundation are used. A strong colony will rapidly draw out fresh foundation and the queen will soon be laying eggs in it.

Give weak colonies one frame of brood at a time, so that bees can cover the entire brood. Insert the frame with brood in the middle where the brood is better nurtured. The number of frames of brood to be given depends upon how weak colonies are. If they need two or more frames of brood at one time, then you can find more than one donating colony. Be sure that any comb being moved from the strong colony does not have the queen on it.

Surplus young bees from the largest adult population are shaken off. The equalizing can be carried out 2 – 3 weeks prior to the honey flows. This helps increasing the adult bee population. Make sure that the queen is not transferred with the bees when shaking out extra bees. Tip: You can shake on to a queen excluder and capture any queen you mistakenly shook.

Exchanging positions of weak colonies with that of strong ones

Swapping the position of colonies is an easy practice to increase the number of foragers in the weaker colony and alleviate the congestion in the stronger one. A weak colony is removed to the spot occupied by a strong hive and the strong hive is moved to the former position of the weak colony. This is usually done when the foraging bees from a strong colony are out during the middle of the day. When the foragers from the strong colony return to the hive they will enter the weak colony now on this spot. Bees flying back laden with nectar or pollen are welcome and accepted into any colony without fighting.

Uniting honey bees by using a sheet of newspaper is the most common method of uniting two different colonies of bees together. The sheet of the newspaper separates the two colonies and allows a slow mingling of the odours of the two colonies, so bees integrate with minimum fighting. A queenless or weak colony and packaged bees may be united with another by this method.

Requeening involves the removal of an old or substandard queen from a hive and putting in a new queen. Requeening is an important apart of hive management and is essential for maintaining strong and productive colonies.